Senator for Urban Development and Environment

Andreas Geisel has served as the Berlin Senator for Urban development and Environment since Michael Müller was elected Berlin Mayor in 2014. Prior to this, he was Mayor of Lichtenberg (Berlin, 2011-2014), and Director of the Economics, Human Resources, and Finance Department within the same town hall.

From 1995 to 2006, he worked in a variety of roles as municipal advisor for urban development, construction, property, and the environment.Andreas Geisel has also worked at Pricewaterhouse (1994-1995) and Deutsche Telekom (1990-1992). He studied transportation and telecommunications systems at Dresden University of Technology. 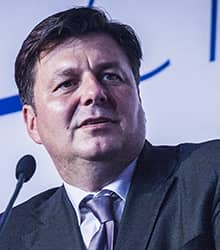