David Luberoff is a writer, teacher, and consultant who focuses on bringing together scholars, students, practitioners, and civic leaders to understand and address key urban issues.

He is a Sociology Lecturer at Harvard where he developed “Reinventing (and Reimagining) Boston: The Changing American City,” a class that uses Boston to help undergraduates think analytically about urban issues. He is a lecturer at Northeastern University’s School of Public Policy and Urban Affairs, where he co-teaches a course on transportation policy.

Additionally, Luberoff is Senior Project Advisor to the Boston Area Research Initiative, a research partnership based at Harvard’s Radcliffe Institute for Advanced Study, and co-Director of the Boston Portal of the Harvard-Mellon Urban Initiative.

From 2004 until 2012, Luberoff was Executive Director of Harvard’s Rappaport Institute for Greater Boston. He has also been Associate Director of Harvard’s Taubman Center for State and Local Government, a columnist for Governing Magazine, and editor of The Tab, which was greater Boston’s largest group of weekly newspapers.
Luberoff received an MPA from Harvard’s Kennedy School of Government and a BA in History from Wesleyan University. 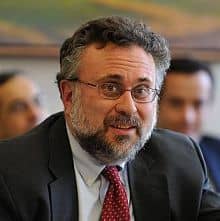