Since May 2014, Mary-Ann Schreurs (Amsterdam, 1957) is vice-mayor of innovation, culture, design and sustainability for the city of Eindhoven. Mary-Ann graduated as a theoretical chemist at ‘Vrije Universiteit’ in Amsterdam.

Mary-Ann Schreurs believes in design as an important engine for our economy and being just the right tool for defying big challenges of the city.

As the first Dutch vice-mayor of design she therefore introduced design in local innovation policy. Her goal is to improve citizen’s lives by using the methodology of design thinking in co-creation with the citizens itself and other stakeholders in the city. Before she became council member and vice-mayor in Eindhoven, she was co-initiator of (European) innovation projects linked to design. 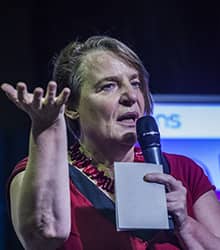