Kay Hughes is currently Project Sponsor and Principal Design adviser at the Olympic Delivery Authority (ODA) where she was the Client representative for the Aquatics centre in 2006 and has subsequently led on Utilities and Infrastructure architectural design across the Olympic Park to deliver an exemplary and award winning family of buildings and structures.

Prior to that she was a Senior client representative for the Foreign and Commonwealth Office (FCO) where she had led and delivered high profile Embassy projects overseas in Warsaw, Bangkok, Madrid, Istanbul and Skopje.
She trained as an architect and spent her early career working for a number of high profile British architects in the UK and overseas as well as working in Barcelona on the Olympic Village for the 1992 Olympics. 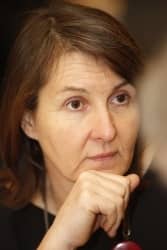