Born in 1965, Robert Bello, an engineer who graduated from the Ecole des Mines d’Alès, began his career at Eurovia in 1988. He started out in Seine-Saint-Denis as a works engineer and then sector manager.

From 1993, he held various agency manager positions in the Île-de-France region before being appointed regional director in Languedoc-Roussillon in 2005 and then in Île-de-France in 2011. 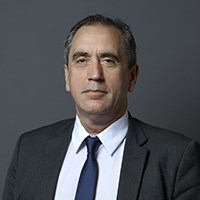