Susan Crawford is Professor at Harvard Law School.Susan Crawford is the author of “Captive Audience : The Telecom Industry and Monopoly Power in the New Gilded Age”, co-author of “The Responsive City: Engaging Communities Through Data-Smart Governance”, and a contributor to Medium.com’s Backchannel.

She served as Special Assistant to the President for Science, Technology, and Innovation Policy (2009), co-led the FCC transition team between the Bush and Obama administrations, and served on the ICANN board from 2005-08.
Susan Crawford also served as a member of Mayor Michael Bloomberg’s Advisory Council on Technology and Innovation and is now a memberof Mayor Bill de Blasio’s Broadband Task Force.

She was a partner with the Washington, DC law firm of Wilmer, Cutler & Pickering (now WilmerHale) before becoming a professor. 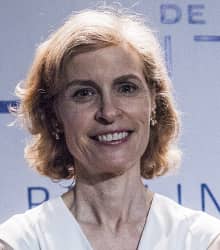