Anne Le Bour is Head of Corporate Communications for VINCI Concessions since 2016 and VINCI Airports since 2011. She pilots the digital strategy of the company as well as the customer experience in airports. She thinks airports should be living spaces and not only transition zones. With VINCI Airports, she strives to create new innovative services to add value to the 100 million passengers who are yearly welcomed by the 34 airports of VINCI Airports’ network. She also actively participates to strategic reflexions of VINCI Airports in several countries such as Portugal, Japan and Dominican Republic where VINCI Airports bought, respectively, 10, 2 and 6 airports.

In July 2016, she is appointed Communications Director of VINCI Concessions and joins its executive committee.
Before joining VINCI Airports, Anne Le Bour was Head of Corporate Communications at Brittany Ferries for 12 years. In 2002, shed joined Brit Air (Air France Group) where she worked on the company’s involvement in the Vendée Globe race during which their monohull came second. Anne Le Bour is graduated from the CELSA – École des Hautes Études en Sciences de l’information et de la communication (France).

Anne Le Bour is a member of the steering committee of La Fabrique de la Cité. 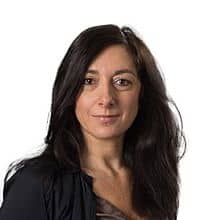