Denis Aubron is the Director of the Transport Development Offer at VINCI Energies and an engineer by training (E.S.M.E. Sudria). He began his career in 1989 with ALSTOM Diesel as the Assistant to the Subsidiary Director in Dakar.

In 1991, he joined Cegelec where he was entrusted with the task of designing the traffic-management system for the Channel Tunnel terminals. Later, he took part in the development of Facility Management, a provider of building-management solutions (now known as FACEO), before joining VINCI Energies in 1997 as Divisional Director for GTIE Rhône Alpes. He immediately positioned and developed the company (renamed GTIE Transport) in the infrastructure market. He acquired LEE through merger and created LEE Conseil, a specialized consulting firm in the area of transit and mobility management.

In 2008 and 2009, he led the VINCI Energies Offer for the light-rail and train PPP project at Reunion Island prior to his appointment as Director of the Transport Development Offer. 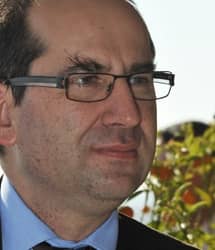