Carlo F. Ratti is an Italian engineer and architect. He is a professor at the Massachusetts Institute of Technology (MIT) in the United States, where he manages the SENSEable City Laboratory. In his work he employs real-time cartography techniques and other innovative technologies to provide a radically new take on the way we design, use, and experience the modern city.

Carlo Ratti is a graduate of École Nationale des Ponts et Chaussées in Paris, France, and Politecnico di Torino in Italy. He studied architecture at Cambridge University in the United Kingdom. In 2000, he obtained a Fulbright scholarship to pursue post-doctoral studies at MIT with Hiroshi Ishii at the MIT Media Lab. He is a regular contributor to university publications and reviews on architecture and urban development.

In 2002, Carlo Ratti founded “carlorattiassociati,” a design firm with Walter Nicolino. The firm, which has won numerous international prizes, designed the Digital Water Pavilion in May 2007. The Pavilion was built for the 2008 international exhibition in Zaragoza, Spain and was named among the best inventions of 2007 by TIME Magazine.

In 2003, Carlo Ratti created the SENSEable City Laboratory, a research group within MIT that investigates the “city in real-time” through the growing deployment of sensors and new technologies as well as their relationship with the urban environment. Their project, “New York Talk Exchange,” examined the international exchange of information, illustrated through the real-time visualization of telephone and internet communications in New York City. 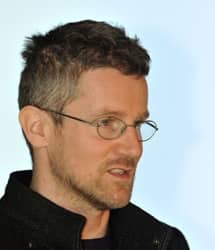