Chris Osgood is City of Boston’s Chief of Streets since August 2015. As a member of the Mayor’s cabinet, he works with the City’s Public Works and Transportation Departments to lead efforts to improve Boston’s basic city services and to create a more sustainable, equitable and efficient transportation network. Chris Osgood was previously the Co-Chair for the Mayor’s Office of New Urban Mechanics in Boston, the City’s civic innovation team founded in 2010.

During his decade of experience in city government, Chris has focused on designing and implementing new programs and policies that increase and improve collaboration between the public and the public sector. Before joining the City of Boston, Chris earned his MBA from Harvard after serving for 5 years in the NYC Parks & Recreation Department.

He is both a City Year and Haverford College alumni. 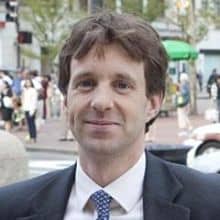