His career has consistently followed two tracks, one as a civil engineer, and the other as a medieval historian and archeologist. From 1977 to 1981, he began working in the transportation field as an engineer in the Department for the study of roads and motorways. He worked for two years long with the Museum of Science and Technology of la Villette. In 1983, he was district manager at the Departmental Equipment Directorate (DDE) of Seine-Saint-Denis, where he worked on the urban integration of highway A86 (1983-86), which was then under construction and planning.

In 1986, he joined the Road Directorate, where he headed the Road Investment Directorate in 1986-87. He was then named Technical Advisor in the cabinet of Pierre Méhaignerie (Minister of Equipment, Housing, Land Development and Transportation) to monitor the implementation of the “Plan Méhaignerie” highway plan (1987-88). After spending several months as deputy executive officer of the Union of toll highway companies (Union des sociétés d’autoroutes à péage) in 1988, he was appointed Executive Director (1989-97), then Chief Executive Officer (1997-2001) of the Paris-Normandy Motorway Company (Société des autoroutes Paris-Normandie), then in charge of the construction of the A29 (Amiens-Le Havre) and A14 (Poissy-La Défense) highways.

He was Executive officer (2001), then President (2016) of the Association of French Motorway Companies (Association des sociétés françaises d’autoroutes, or ASFA), where he took an active role in the public-to-private evolution of the motorway industry in 2005-2006. He is now the President of the Union routière de France (French Road Union).

His historical and archeological research have prompted him to explore other areas, and he has acquired international renown in the field of medieval architecture. Jean Mesqui is a member of the steering committee of La Fabrique de la Cité. 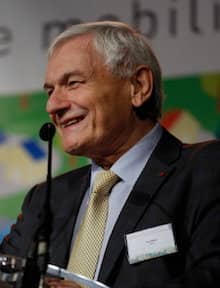