Nowadays Rémi Dorval is an active member of the welikestartup network and is supporting innovation in France by investment. He is the former Chairman of La Fabrique de la Cité from 2010 to 2015.

Remi Dorval held various positions in the Ministry of Industry (Energy sector) and in the Ministry of Finance (Banking sector). In 1991, he joined the Energy sector, and became CEO of an oil-drilling company (Forasol). From 1997 to 2010, he was appointed as Vice-Chairman and President and then Chairman and CEO of Soletanche-Bachy (a construction company). He’s Chairman of the Board of Directors of CGG Veritas since april 2014.

Rémi Dorval is a member of the steering committee of La Fabrique de la Cité (The City Factory). 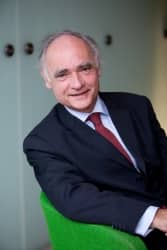