Sandra Lagumina is Deputy CEO. Graduated of Sciences Po Paris and of the ENA (promotion René Char), she also has a DESS in common market law and in Public Law.

She joined Gaz de France in 2005 as deputy director for strategy in charge of institutional relations. She then became juridical director of Gaz de France and then of GDF SUEZ. From 2013 to 2016 she is Chief Executive officer of GRDF. Sandra Lagumina is also member of the executive board of the Autorité de la Concurrence et of the Conseil économique, social et environnemental. She is administrator of DCNS.

Sandra Lagumina is a member of the steering committee of La Fabrique de la Cité. 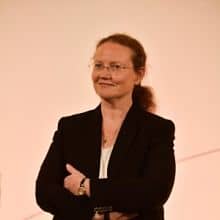